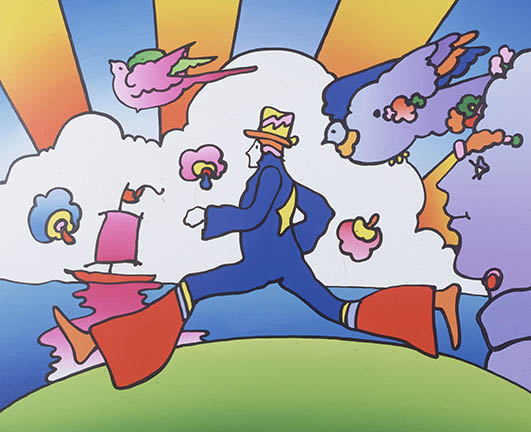 The amazing art of Peter Max

Back in high school I was a big fan of Peter Max.   His work was everywhere – on the cover of Life Magazine, on album covers for The Beatles, and on psychedelic day-glow posters at the head shop on Journal Square in Jersey City, the town where I grew up.  I remember staring at his freaky top-hatted flying people surrounded by balloon-like stars and planets rendered in bright primary colors.  It was therefore with sadness that I read in the New York Times the unfortunate post-script of Mr. Max’s career as a cultural icon.  Now 81 years old with probable dementia, he’s had his name and art co-opted by opportunists in what is likely a multi-million dollar case of elder abuse and fraud.

I am a geriatrician – an internist with a subspecialty of caring for older adults.  As such, over the years I’ve become familiar with the ravages of dementia and the effect it has on people around them.  Dementia is a group of diseases characterized by progressive neurological deterioration and cognitive decline.  There are a number of subtypes but the end result is often the same.  Loss of memory progresses to inability to toilet ones-self and perform routine functions such as eating and walking.  The loss of cognition sometimes renders them vulnerable to opportunists looking to waylay their assets, or in Mr. Max’s case, use his name to make millions.

There are several types of elder abuse.  Physical and verbal abuse is the most obvious, but other types can be insidious and difficult to diagnose, particularly if practitioners do not think about it – what doctors commonly call the “index of suspicion.”  These other types of elder abuse include financial exploitation, which is what the New York Times article describes.

The Times describes a tangled web of individuals and companies that engineered an art-making machine using a team of “ghost painters” as Mr. Max’s ability to make art slipped away. There are conflicting accounts of the artist’s ability to actually paint.  Some say that he no longer puts a brush to canvas while others claim that his output and creativity increased with dementia – a claim that has limited credibility.  The article describes multiple lawsuits, warring family factions, and chilling details that include a son who installed surveillance cameras and doors with metal bars on his father’s studio above Shun Lee West, a Chinese restaurant near Lincoln Square.

The sad story of Peter Max might have made it to the Sunday Times, but it is not an isolated incident.  Elder financial abuse is big business.  According to the Medicare Advantage website, elder financial abuse results in over $36 billion in losses from scams, fraud, and exploitation.  Although persons with dementia are especially at risk, older adults without dementia are vulnerable due to factors that include loneliness and social isolation.

As a geriatrician my prescription for Mr. Max would be a comprehensive geriatric assessment.  This would include a screening test for cognitive ability.  One of the most widely accepted is the MoCA, or Montreal Cognitive Assessment.  This 30 item test takes less than fifteen minutes to administer and gives a rough estimate of orientation, memory, visuospatial function, and other potential indicators of dementia.  The result must be interpreted in the context of the entire geriatric assessment including family interviews, medication list, blood tests, and other studies.

For years I worked at St. Vincent’s Hospital – a now-shuttered institution in the West Village – in the heart of what was once a thriving artist community.  As a geriatrician I had the opportunity to care for many older artists who were suffering with the infirmities of old age.  I became friends with some, and visited their studios and shows.  Few of them made a living with their art, and most remained completely unknown in the art world.  I didn’t know Peter Max, but he was a rare exception.  With international name recognition and an easily recognizable style his signature had great value, particularly for predators looking to make a buck.

I am sorry that Mr. Max stopped painting, and hope his family gets him the proper help he needs.

Click here for the NY Times article on Peter Max

Click here for an article on elder abuse I wrote two decades ago, but still relevant