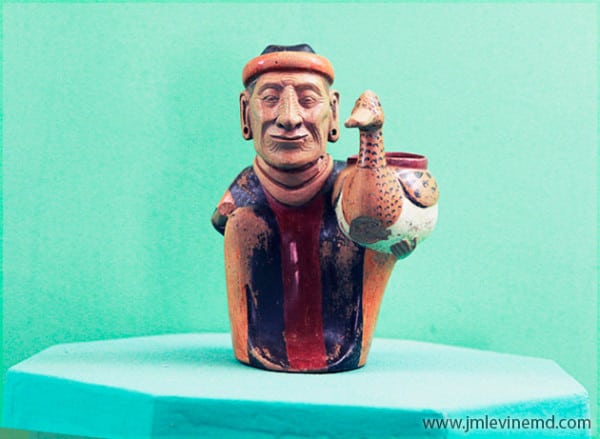 I recently traveled to the Bolivian highlands and Lake Titicaca to find new faces of aging, and on the way discovered an exquisite example of ancient treasure featuring geriatrics and art. 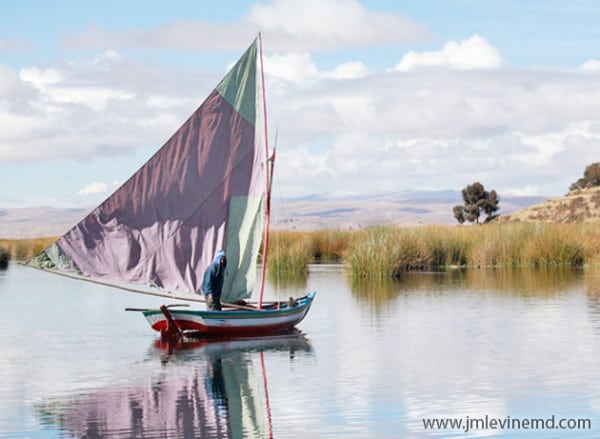 The Pariti Ceramics Museum was not listed in my guidebook.  In fact, Pariti Island where the museum is located is so small it is unmarked on most maps.  I learned out about it from my guide when I came across a photo of a ceramic featuring an elderly man holding a duck.  Given my interest in geriatrics and art, I became excited when I learned that this island was a small detour off our route to Isla del Sol to watch the winter solstice ceremonies with the local shamans.

We pulled off the road in a town called Huatajata, on the shore of the Lago Pequeño – part of Lake Titicaca that is separated from the larger lake by the Tiquina Straits.  Lake Titicaca is a sacred place, and for the local Aymara and Quechua speaking people it is home to Viracocha, the creator of the world.  After haggling with a local captain on a price, we set off in a motorboat for Pariti Island, a 45 minute ride. 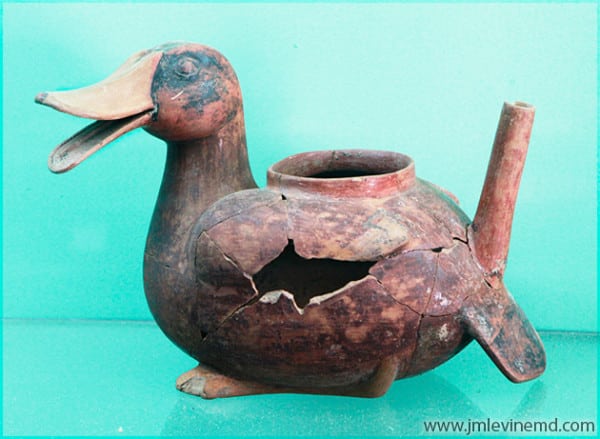 Huge cumulus clouds dotted the vivid blue sky, snow-capped mountains lined the eastern horizon, and there was nobody else on the lake except for an occasional fisherman.  At 12,500 feet in the Andes, everything looked sharp and bright.  The island was surrounded by acres of reeds called tortora that were used in the past to cover roofs and build lightweight boats.  Hundreds of ducks scattered as we approached. 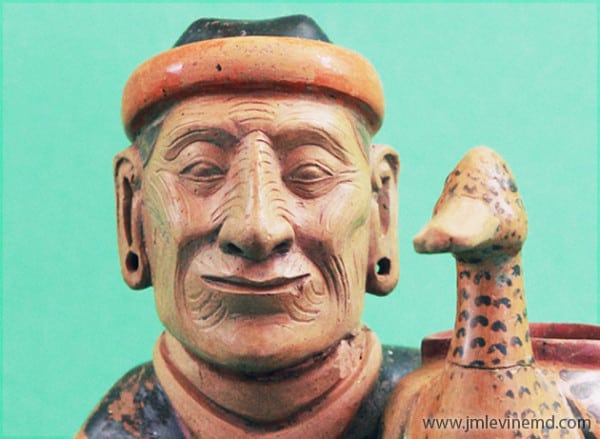 Pariti Island’s inhabitants consisted of a few families along with dogs, pigs and sheep, all of which wandered around freely.  A group of children played with an old bicycle wheel on a hill.  There was one little brick church surrounded by dilapidated thatched homes, and I was the only tourist. 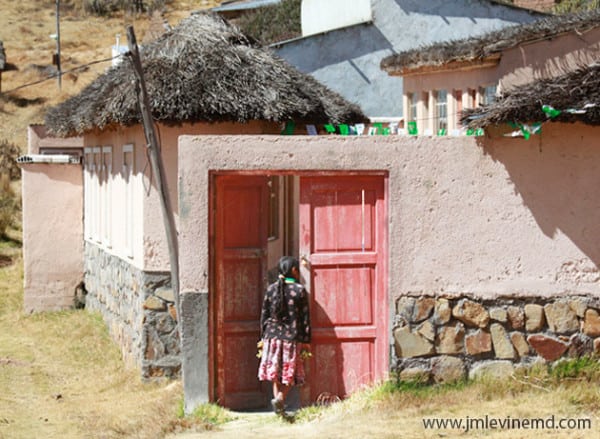 The museum was a short walk from the dock where fishermen were mending nets, but there was no sign that directed visitors or identified the museum.  A sleepy guard collected my entry fee, unlocked the door and turned on the light.  A curious little girl stared at me as I wandered around the small two room exhibit space. 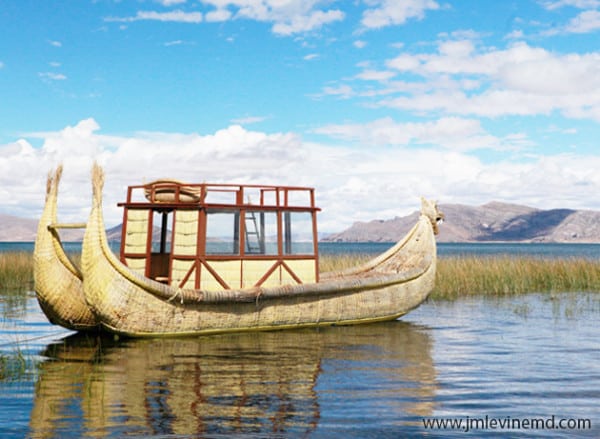 The ceramics dated from between 900 and 1050 AD and were from the Tiwanaku culture which flourished before the Incas.  They were discovered on the island and placed in this museum in the hopes that it would become a tourist destination.  Not surprisingly, many of the ceramics featured ducks that live in the tortora that surround the island. 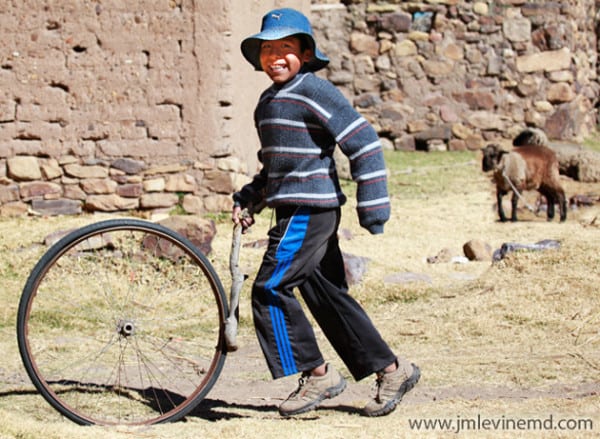 The goal of my visit – the ceramic of the old man with a duck – sat apart on his own shelf.  It was not more than five inches tall and the colors were realistic and sublime.  He had a small cap and a faint smile, and proudly displayed the deep wrinkles on his face.  His elongated earlobes had large piercings which once may have had plugs of gold representing the fashion of the aristocratic classes.  He wore a long robe of blue and orange, and a spout projected from the back of the ceramic. 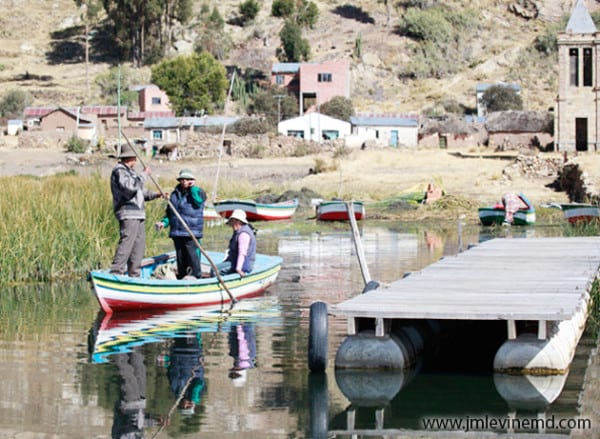 He held aloft a fat, contented looking, speckled duck.  Was this his pet, or perhaps a presentation for a ritual meal or special occasion?  They looked like they had a common bond, linked perhaps by companionship or the marshy environment of the sacred lake. 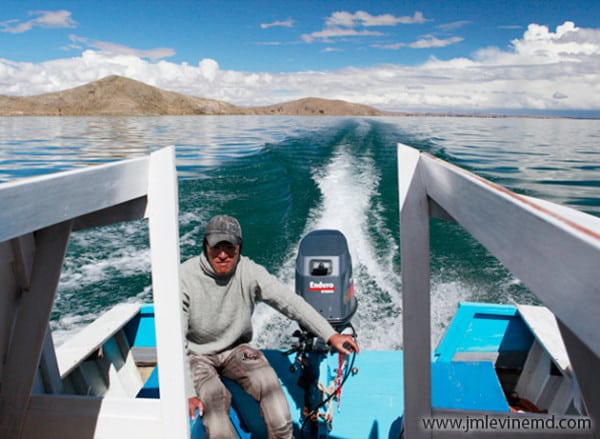 And what was the purpose of this figure?  The waters of the lake were considered sacred, and the spout at the back may offer a clue that the ceramic was used in religious rituals.  Was this perhaps a votive figure, made as an act of worship and placed in a shrine?  Maybe this was an ancestor portrait, created to memorialize a favorite uncle or grandfather.  Some ancient cultures endowed people with physical changes of age with mystical powers, and perhaps this is why the man wears his wrinkles with such pride.  The answers have been lost to time for this thousand year old mini-masterpiece of craftsmanship.

The view of aging presented by this ceramic gem was one of dignity, participation, engagement and power.  In this remote museum under the bright Bolivian sunshine, with a little girl curiously trailing me, I wondered how different this was from the view of aging in our own society. A Train Graveyard in Thorndike Maine
Aging on the Covers of The Gerontologist
Celebrating Old Age at the Burning Ghats of Benares
Victory Day in Moscow
A Taste of Ancient Peruvian Medicine
The Twilignt of Jewish South Beach, Miami
The Elders of Taquile Island in Peru
Aging in Central Asia
Photographing Los Ancianos of Bolivia
Aging Inside Angola State Penitentiary
Faces of Istanbul
Photographing Wigstock in Tompkins Square Park 2003
An Abandoned Psychiatric Hospital in Tuscany
Childhood Dreams Under the Pulaski Skyway
Manhattan After the Hurricane
Photographing Letchworth Village
Returning to Cow Canyon Trading Post
More Vanished Signs of New York
The Meatpacking District Before the High Line