The biker struggled to get her leg over the saddle of her Harley, and looked up at me a bit chagrined.  “I just had my knee replaced and still having some trouble,” she said. 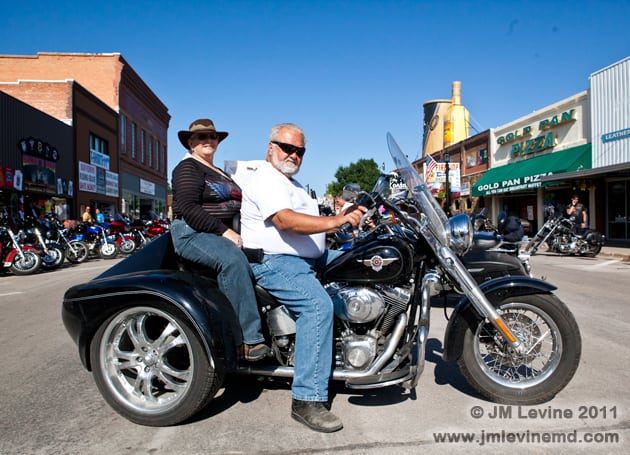 The event was Sturgis, perhaps the largest motorcycle rally in America, and this lady was one of hundreds of older cycle enthusiasts, some of whom have been coming every year for decades.  The event is named for the town at the edge of the South Dakota prairie, just before the landscape radically transforms into the mountainous region called the Black Hills.  Sturgis is huge.  Each August a half million thundering motorcycles descend on this town which is usually home to about 6,000 people.  Bikers come from all over America, and some have been on the road for weeks. I flew into Pierre, the state capital, because there were no rental cars left in Rapid City which is closer to the event.  I didn’t mind driving the extra 180 miles each way, because I always wanted to see the Great Plains.  Unfortunately despite my reservation there were no cars available in Pierre, and I ended up renting a 1995 Suburban from a 90 year old man named Joe, who came to the airport wearing a wide brimmed straw hat.  There were used bullet casings scattered about the floor of the vehicle that I didn’t ask about. 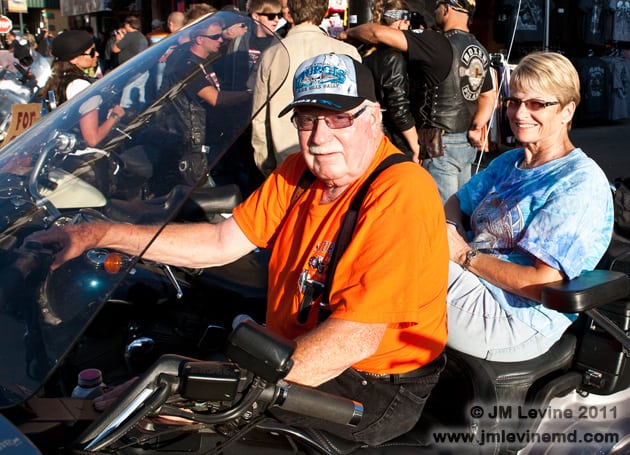 The next day I began at sunup and drove across the state, past miles of mechanized farmland with no people around.  The only motorists seemed to be bikers on the way to Sturgis, and every service station had a small knot of riders gassing up.   I took a couple of detours and stopped on the Lakota reservation to visit the Red Horse summer camp whose goal is to teach Native American culture to the children, and the subject of a future blog post. 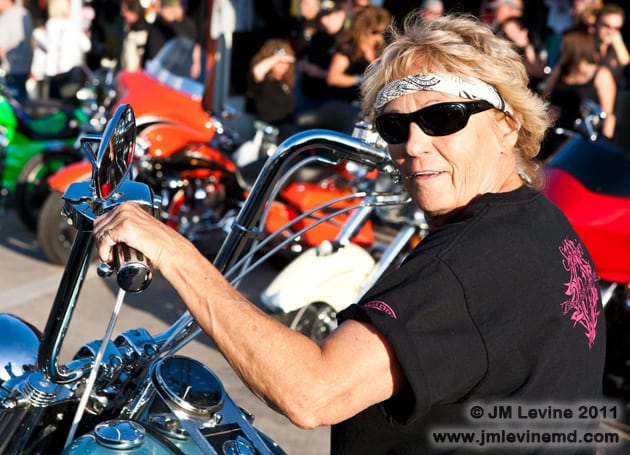 Once I got to Sturgis the open road gave way to streets clogged with motorcycles, with Main Street blocked off to automobiles.  I arrived in mid-afternoon, parked my Suburban, grabbed my camera gear and headed to the main drag to find the oldest bikers.  There were plenty of them, and they definitely added to the atmosphere.  I photographed in the streets until sundown, then had dinner in a biker bar and tried to find a place to sleep. 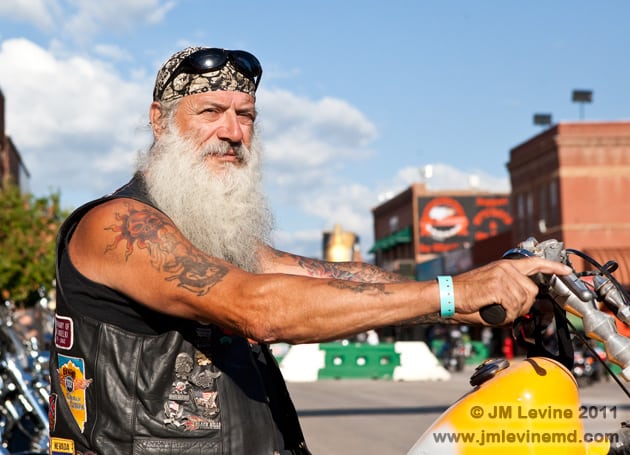 Finding a bed was impossible at the height of Sturgis, and I landed on the lawn of someone’s backyard.  Luckily I brought my tent and sleeping bag.  The next day I started at dawn to catch the morning light and find some old bikers grabbing breakfast on Main Street.  There were more than a few.

Zip Lanicek, a 75 year old biker came from Dallas.  He told me this was his twentieth time at Sturgis.  He is now retired, but spent his life traveling the country installing heavy kitchen equipment in restaurants and bars.  He spat wads of tobacco juice on the street between sentences.  When I asked him why he comes here, he said, “I like the people, the weather, the action, and checking out the pretty girls!” 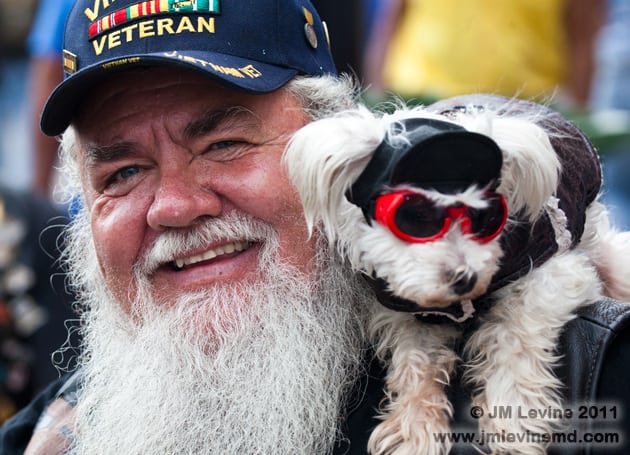 Heinz Woelke was a grizzled and tattooed biker from Battle Mountain, Nevada.  He’d spent his working life underground in the mines, and clearly looked the part.  He wouldn’t tell me his age, but it was clear he’d been around for a while.  He was proud of his vintage Harley, a K-Model Hanley made in 1954.  That year sounded familiar because I just had a birthday, and recall saying, “Wow that thing is the same age as me!”

There were many older couples, and they were all having a blast.  Just about every couple I spoke to made Sturgis their yearly pilgrimage.  The lady with the knee replacement had her husband customize the motorcycle to accommodate her pain and limitation of motion.  She was clearly physically uncomfortable getting on and off the bike, but her jacket had at least 30 patches from past Sturgis rallies.  She said to me, “As long as my husband can gas up the chopper I’ll be back!”

I’d never seen Mount Rushmore, so I hopped in my Suburban and joined the long line of motorcycles into the Black Hills.  On a detour to Custer State Park, I had the incredible experience of watching a herd of buffalo cross the road, causing a biker backup of about a half mile in both directions. 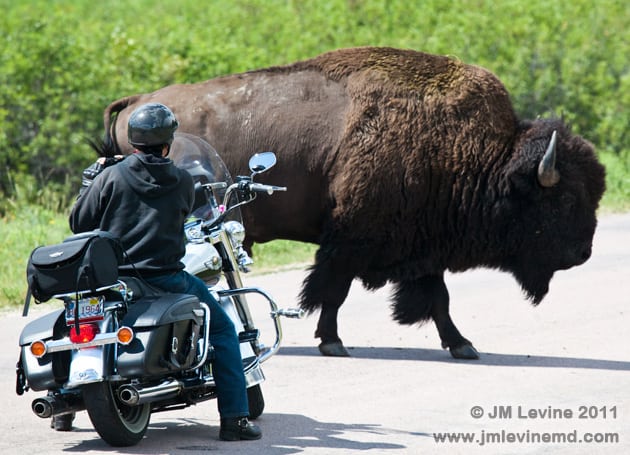 When I paid for the car on my return to Pierre, Joe asked me what kind of work I do.  When I explained I was a geriatrician, he told me of his tribulations with his sick wife, to whom he’d been married for over 60 years.  She’d just had a fall, and he found her helpless on the kitchen floor.

Biking in old age may have its downside, as the average age of persons killed in motorcycle accidents is statistically on the rise.  But if there is anything that I’ve learned as a doctor working with old people, it’s the importance of enjoying as much life as possible while functional status remains.  In our society there is a huge issue with people growing old and driving, but that is the subject of another blog post.  Meanwhile, congrats to the geriatric bikers who continue to come to Sturgis! 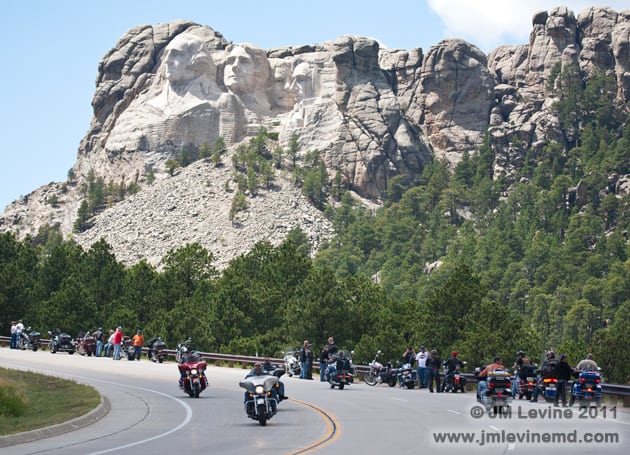